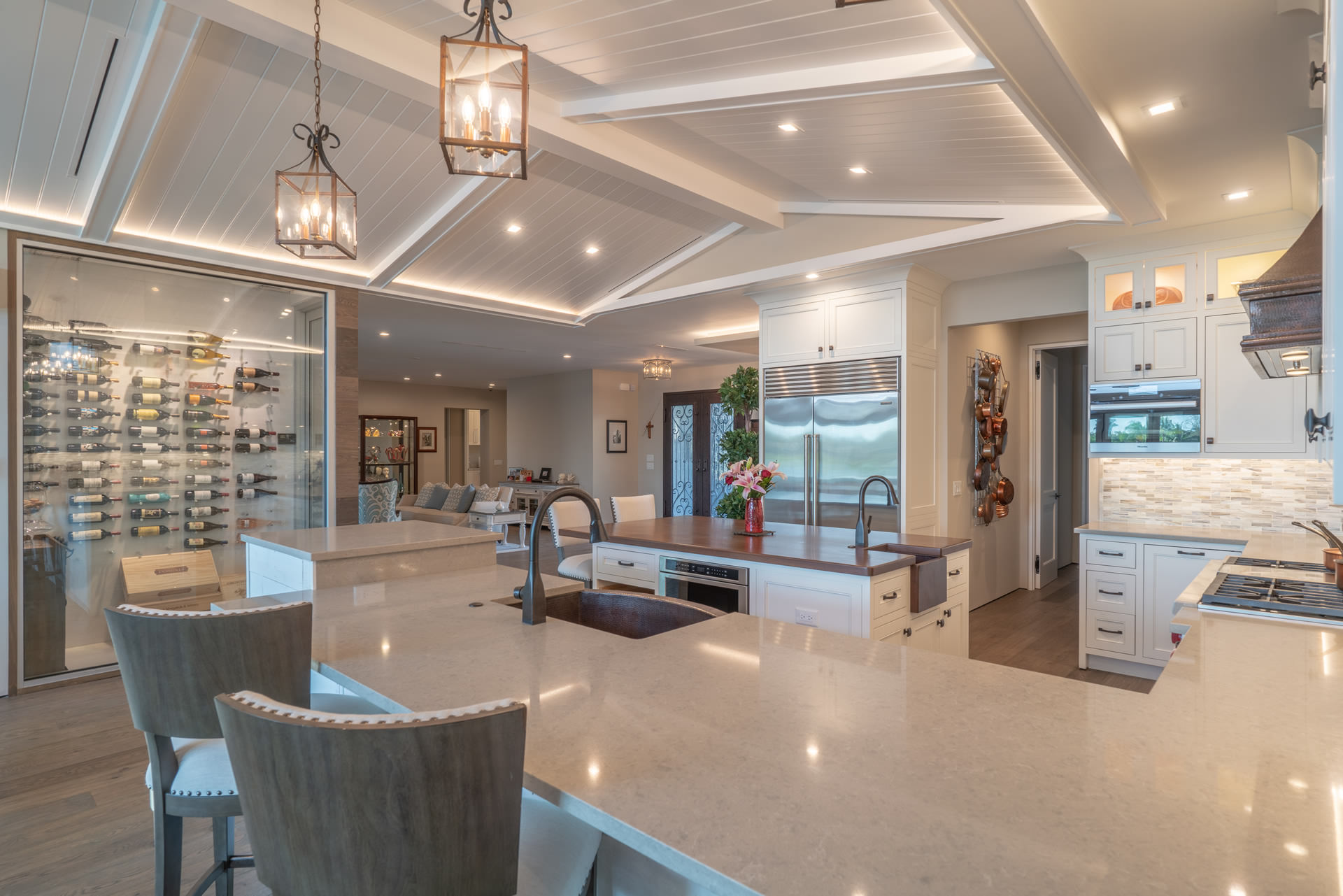 A big construction and remodeling debate has gone on for years revolving around the subject of whether or not to have an open area with separate cluster areas, something very popular here in Florida, or going with the individual room floor plan. Homeowners in general love the feeling of having a “great room” in their home, without the restriction of walls separating the rooms. It lets in more natural light, allows for better air flow, and allows families to interact and converse from separate rooms. Think about it, a busy mom can more easily multitask within the open floor plan. While keeping an eye on her toddler playing nearby, she can also help the older kids with homework, make dinner and check email. Yes, it happens all the time, lol! This layout is also advantageous to those working from home.

The open space layout provides a seamless “ﬂow” from one living area to the next, allowing for that visual connection that otherwise wouldn’t exist. John Sweet, Principal and owner of J. Sweet Construction, adds that an open floor plan can also make an older house with lower ceilings feel bigger. “It gives the feeling of spaciousness, so you don’t tend to pay attention to the ceiling height as much,” he says, agreeing that the biggest advantage of open spaces is purely a social thing. People are entertaining more these days and tend to congregate in the kitchen at parties; by taking down the walls, Sweet points out, you’ve got more room to socialize.

Sold on an open floor remodel yet? Before you grab the sledgehammer, think about that wall you’re about to demolish and all the things hiding inside it, like electrical wiring, cabinetry, possible plumbing, whether or not its attached to a support beam, vent grates, and the flooring around the wall that will be affected. “Electrical can be easily remedied,” says John, “but flooring is a different story. If you’re removing walls and don’t have the flooring to do the patchwork where the walls stood, you’re having to redo all the flooring.”

There are those, however, who insist that rooms still very much have a place in our homes in 2019. Some defenders of separate rooms have suggested the idea of a second kitchen, the one where the real dirty work happens and the dishes can safely pile up, that stays hidden from the party. Ian Bogost, in an essay published in The Atlantic, described the “mess kitchen” as a demonstration of why the open floor plan is borderline absurd. In an article for Citylab, Kate Hunter, an architecture and design critic, agrees that the separate-room floor plan is making a comeback, more so to combat global climate change than any other reason. She argues that closed kitchen, for example, can help us go green and save energy via the simple principle of not heating and cooling rooms that are not currently in use, as well as by isolating rooms we want to keep warm or cool. Citylab, an online publication focusing on those who are creating and living in the cities of the future, also presents the argument that a closed kitchen decreases the number of steps the chef needs to take between cooking and prep stations. The chef’s feet appreciate that!

Then there is the issue of why rooms were invented in the first place, for privacy. As much as we love to socialize, alone time is still important time. Hence the rise of the “man-cave” and “she-shed” building designs. As much as we appreciate our social time, we need some peace and quiet too. As Bogost points out in his Atlantic piece, in the past, public-private spaces like formal living rooms and parlors would have received guests, sparing the home the embarrassment of view of its private spaces like a messy kitchen. Nowadays, the quick clean-up before guests arrive is a tactic we must master.

If you’re still mulling over the right choice for your home, J. Sweet Construction has some great ideas. Put over 20 years’ experience to work for you.

Blog
DHA in the News
Media
Careers
Services
Our Work

Dragon Horse was founded in 2015, headquartered in Naples, FL, with offices in Santa Monica, CA, is a multi-award-winning business marketing leader offering services designed to achieve clients’ goals. Dragon Horse is the next generation creative syndicate, a marketing and business strategy agency, combining synergies of in-depth skill sets in one integrated, comprehensive solution for business success.