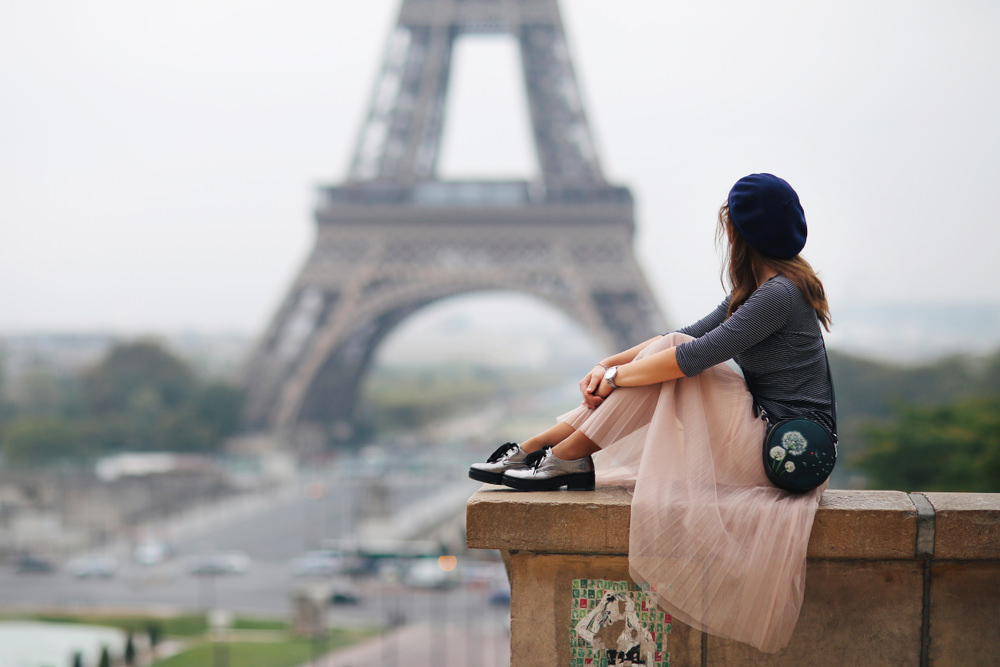 When it comes to fashion, we quite often turn to our True Fashionista French friends for inspiration, and with good reason: They’ve got quite the track record, having made an industry out of fashion since the 17thcentury, says WhatParis. We’re turning the Face àFaces on Paris for the moment in order to fully understand the definition of “Parisienne chic”, and what it takes to rock it.

Sherry at Save Spend Splurge shares that Parisienne chic has oft been described as using a bit of restraint, of all things. Leave the flash and the glitz at home, keeping it simple and refined. Coco Chanel perhaps said it best, “Before leaving the house, a lady should look in the mirror and remove one accessory.” For example, wear that adorable dress, simple pair of sandals and no accessories. Let the cuteness stand on its own. And done! Maybe you have a great graphic t-shirt you’d like to show off. Wear it with some jeans, unassuming shoes like ballet flats, and throw your hair into a simple chignon. Add a light jacket if you choose, and that’s all you need. Less is better. This IS Paris, after all.

The pieces in your wardrobe that generally fit into this description would, no surprise, be mostly solids, barely a print and mainly neutral colors. Keep your outfits monochromatic, no mixing or matching of prints or colors. And your makeup? Minimal, baby. If you do lipstick, don’t even think about the eyes.

What Paris nails it here: Fashion has always existed at the crossroads of art and consumerism and never more so than in today’s society. Paris fashion has always been at the center of it all. We have King Louis XIV’s court to blame, or rather, thank. His nobleness was big on being the center of attention, so no surprise that the luxury goods industry became a royal commodity in his court and country. It was around the 1670’s that fashion press began as well in order to keep the masses informed of the exciting goings-on. They were even the ones to establish fashion “seasons” and the changing of styles.

In the late 19thand early 20thcenturies, the French fashion industry literally exploded, which coincidentally included the founding of Voguein 1892. Enter Ms. Chanel in 1925, followed by Christian Dior, Paco Rabanne and Pierre Cardin, to name but a few. They lost momentum a bit by the mid-1940’s with the focus drifting over to London. However, when Yves Saint Laurent hit the Parisian scene in the 1960’s with his “pret-a-porter” (ready-to-wear) line, Hubert de Givenchy and Pierre Balmain opened fashion houses not long after, and the eyes of the fashion world returned in droves. This move opened up high fashion to the masses, giving the general public the opportunity to get a real grasp on what it meant to capture and reflect Parisienne chic.

Although other cities like Milan, Tokyo. New York and London have carved their way into the fashion scene ove the years, Paris holds reign as foreign designers like Karl Lagerfield (Chanel) and Marc Jacobs (LVMH) make their home there.

Let’s not forget the handbag to round out your Parisienne chic wardrobe. Just like simple, minimalist outfits, you want to go for logo-free, enduring purses and totes in order to effectively round out the look. Keep the colors neutral like navy, black or brown. Choose your style. Parisiennes are even carrying leather folded clutches and wearing crossbodies like bosses.

Think less is more, and you’ll nail Parisienne chic. Shop True Fashionista either in our Naples, Florida store or online for a constantly updated selection of the chic-est pieces to get you in that mindset, or maybe even get you ready for your upcoming Paris trip. Bon voyage!